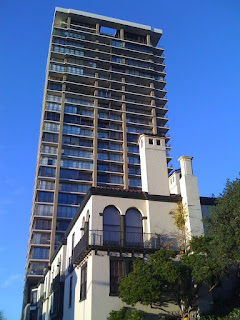 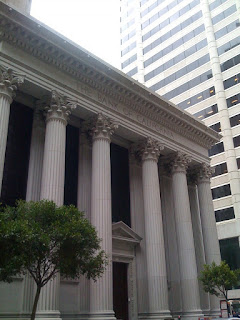 In the top photo, the Russian Hill houses designed by seminal SF architect Willis Polk are in the foreground, Joseph Eichler's Summit tower in the background. Both are really nice works, albeit in very different styles. The Summit is one of only three high-rises built by Eichler, who was primarily known for his modern suburban ranch house developments (which are rather nicer than this, I think). The architect is Tibor Fecskes at Neill Smith and Associates.
The lower photo was taken on California Street in the Financial District. In the foreground, the Bank of California building (1908, Bliss and Favill) looks splendid, a formidable temple of capitalism with its fine Corinthian columns. By contrast, the Union Bank of California building behind it employs bland surfaces that are totally lacking in ornament, which gives it an utter lack of grandeur or even a clearly identifiable purpose. Without the signage, it could be anything.
Posted by Jackie Jouret at 5:04 PM