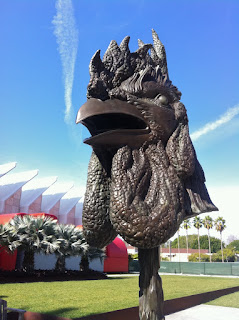 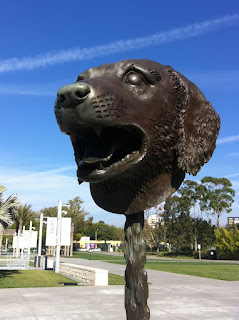 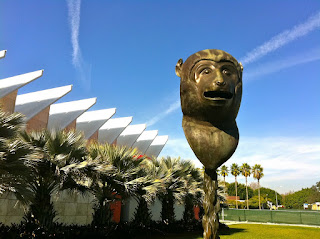 Ai WeiWei's bronze sculpture of the animals of the Chinese Zodiac, at the Los Angeles County Museum of Art. According to LACMA, "The Zodiac Project is Ai Weiwei's first major public sculpture. For this monumental new work, Ai has recreated the famous twelve bronze animal heads that once adorned the Zodiac Fountain in Yuan Ming Yuan, the Old Summer Palace, in Beijing. Cast around 1750, the original heads were looted by Anglo-French troops who took part in the destruction of Yuan Ming Yuan in 1860 during the Second Opium War."
To that, I'd add that the sculptures are as witty as anything Ai has ever done, and he does have a great sense of humor. As always, however, there's more to this work than meets the eye. Ai is engaged in a fascinating exploration of how the past and the present interact and intersect, and much of his work engages in a potent critique of our (and specifically China's) failure to honor the past, and culture in general. Brilliant stuff on an intellectual level, and impressive as form, too.
Posted by Jackie Jouret at 8:32 PM