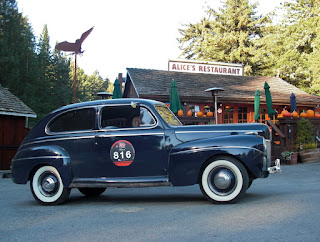 After decades of riding sportbikes and a driving sports cars through the Santa Cruz Mountains, I never imagined I'd park a ’41 Ford Coupe at Alice's, nor that I'd drive it up Highways 9 and 35 to get there. I'm not sure I've ever made such slow progress up those roads, but the challenge was certainly entertaining.
The history of Alice's itself eludes me, but the area around it has an interesting past, primarily as a locus of the counterculture. During Prohibition, the Santa Cruz Mountains hid a number of illegal stills, and in the 1960s Ken Kesey lived in cabin just down the road in La Honda. This was during the epoch of what Tom Wolfe characterized as "The Electric Kool-Aid Acid Test," though as Michael T. Lynch points out, none of the actual "Acid Tests" took place in La Honda.
Forty years on, the Santa Cruz Mountains retain their hippie-ish vibe, and I wouldn't be surprised to stumble upon a pot farm in the midst of the vineyards that are sprouting up here and there. These mountains also have some of the world's best driving roads, though they're better enjoyed in virtually anything other than a ’41 Ford.
Posted by Jackie Jouret at 12:42 PM