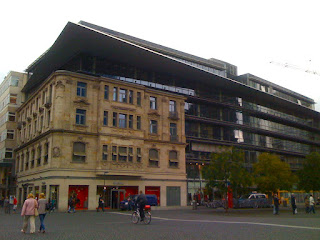 Most of Frankfurt was destroyed by Allied bombing in World War II, and little was reconstructed in historical fashion. Thus the city has a really interesting blend of old buildings and new construction, a mixture that makes Frankfurt a living city rather than a quaint relic. It also makes the destruction palpable, because every new building stands as a reminder of what was there before, and what was lost. It's too bad the city's architectural heritage suffered along with its people, but the destruction seems to have infused the city with a certain vitality that the better-preserved (or totally reconstructed in the historical style) cities often seem to lack.
Posted by Jackie Jouret at 10:54 AM