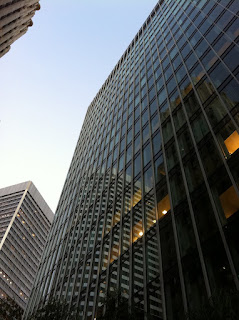 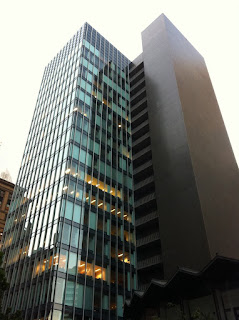 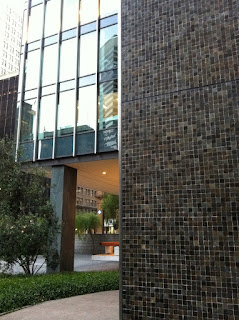 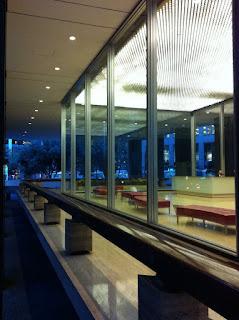 One Bush Street, San Francisco. Another fine work by Skidmore, Owings and Merrill, this 1959 steel and glass skyscraper was the first new building erected in San Francisco after the Great Depression, and it's a beauty. At twilight, its glass curtain walls reflect the fading blue of the sky and reveal the building's steel structure. If you look closely, however, you'll notice that the solid part of the structure isn't concrete as it appears from a distance but thousands of tiny, iridescent Italian tiles. At the street level, the building is a delightful composition that leads pedestrians up to and inside the building in a manner that's welcoming at the same time it impresses with style and grandeur. (The design for the garden was originally assigned to Isamu Noguchi, but that didn't work out and it was done by SO&M instead.) There's also another surprise in the beautifully polished wood railing that encloses the lobby from without, and which alludes to the building's original purpose as the headquarters for Crown-Zellerbach, the forest products company.
Posted by Jackie Jouret at 12:33 PM