SF: The murals of Rincon Annex 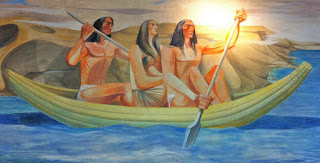 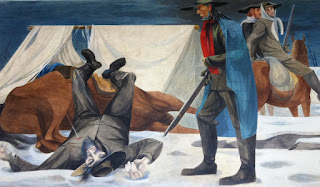 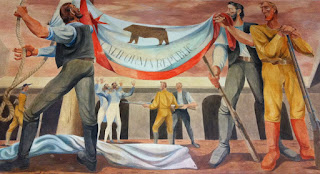 Three of the 27 murals painted for the walls of the Rincon Postal Annex by Anton Refregier in 1946, all of which depict the history of California and San Francisco. Refregier was born in Moscow in 1905 and came to the US for the first time in 1920. He studied at the Rhode Island School of Design and won the competition to paint these murals in 194, beating 83 other artists and earning $26,000 for his efforts, paid by the Works Progress Administration. Refregier's treatment of his subject matter made the murals controversial in their day—naturally, a conservative politician wanted to have them destroyed—but they remained in place throughout the Rincon Annex's functional life as a post office. They were nearly destroyed again in 1978 along with the building itself, but both were saved thanks to the lobbying of artist Emmie Lou Packard. In 1979, the same year that Refregier died in Moscow, the building and its contents were declared a San Francisco landmark.
Posted by Jackie Jouret at 1:20 PM