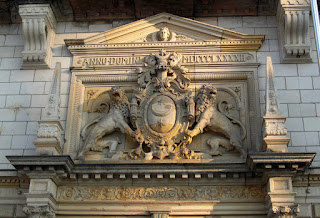 The old Rathaus is a gorgeous piece of neo-Gothic architecture, and it's fairly typical of the buildings in Halle that survived the war and then the Communist period. In this city, the latter was more physically destructive -- most of the town escaped serious damage by Allied bombing, but a lot of it was cleared to make way for grim Stalinist apartment blocks. It's still got plenty of architectural gems like this, however, most in a sad state of repair and far too many unoccupied. Like most cities in the former DDR, not to mention the small towns, Halle is a pretty depressing place these days.
Posted by Jackie Jouret at 10:29 PM