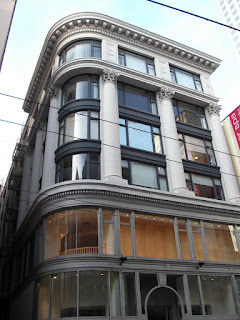 The Cordes Building, built in 1909 and designed by Albert Pissis. Pissis, who was born in Mexico to French parents and grew up in San Francisco, was one of the first Americans to study at the Ecole des Beaux Arts in Paris. (Another noteworthy Bay Area architect, Julia Morgan, was its first female student.) He also designed the Flood Building below (see entries for March 2010), as well as a few other favorites that I'll photograph eventually. Apparently, his buildings were thought rather reactionary at the time of their construction, but they've aged better than most and have an undeniable grandeur that derives from more than mere scale.
Posted by Jackie Jouret at 8:49 PM