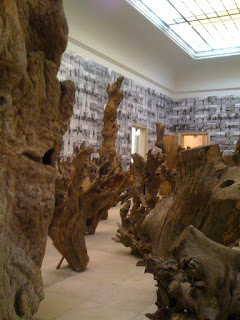 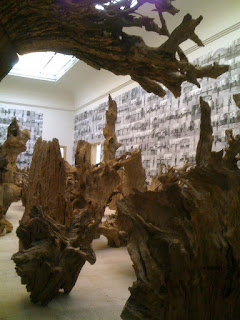 "No Two Are Alike" uses the stumps of cedar trees that were removed from Beijing's hutongs during the massive redevelopment projects that have transformed that city's residential areas. The low-lying courtyard houses that once dominated the city have been destroyed in favor of anonymous high-rises, which might be cleaner and more "modern" but seem unlikely to foster the kinds of interpersonal relationships that flourished in the shared space of the hutongs -- and for the Communist government, that's probably the point.
Along the wall, ordinary Chinese citizens have been photographed in four or five settings. As the title says, "No two are alike," and neither are the cedar trees.
Posted by Jackie Jouret at 9:53 AM