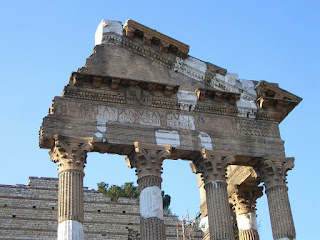 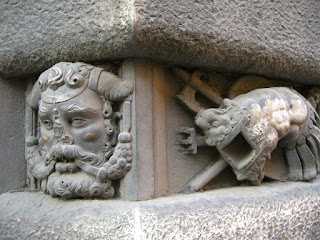 Haven't had anything to post lately, so herewith a couple of photos from Brescia, Italy, that I took in 2007 before the start of the Mille Miglia. At top is the Capitolium erected by Vespasian in 73 AD and excavated in 1823. Below is a bit of architectural detail that seems to have incurred a bit of damage over the years, perhaps during the Partisan fighting during and shortly after WWII. (The history of Italy after the war is absolutely fascinating, particularly as it concerns U.S. anti-communist intervention. It's not much of a stretch to say that the U.S. played a major role in fomenting much of the rightist violence and discord that marked postwar Italy, all in the name of preventing leftist governments -- whether socialist or communist -- from taking control.)
Posted by Jackie Jouret at 9:33 AM