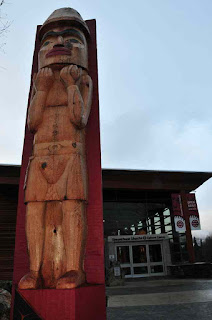 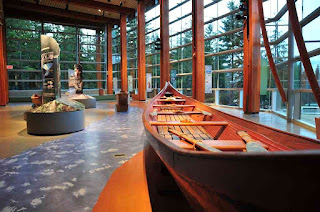 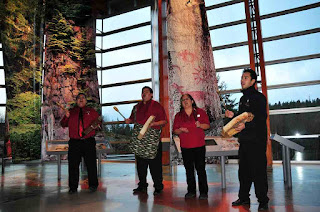 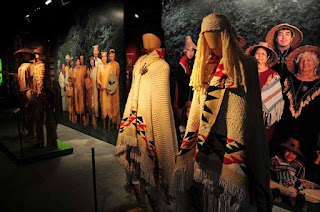 As Michael T. pointed out, and as Helmut and I discovered while there, there's not much to do in Whistler when you aren't skiing. As an antidote to the relentless consumerism of the what H. called a giant shopping mall, the local people have created the wonderful Squamish and Lil'wat Cultural Center. Built in the manner of an oversized longhouse, the center presents Native culture in the form of incredible canoes, beautiful wood carvings, weavings, traditional clothing, etc. The emphasis is not so much on the items on display as mere artifacts, however, but as evidence of the Native peoples' ability to live in harmony with their environment, which they did for nearly 10,000 years until the arrival of European-American capitalism and the "ownership society." To say that the two ways of life were and are completely incompatible is the understatement of the millenium.
Unlike the other photos on this blog, these were taken by Helmut Werb, using a Nikon D300 instead of the Casio pocket camera with which I took the rest. That and his superior skill with said device explain the gulf in quality!
Posted by Jackie Jouret at 4:44 PM