Remnants of the 19th-century city 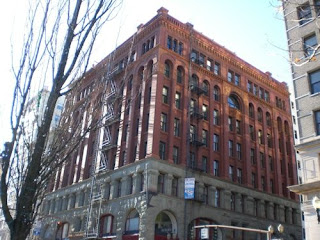 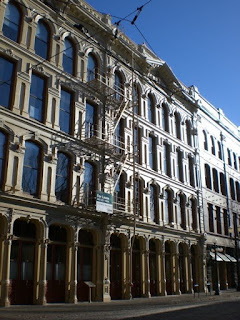 What happens to a city when its population increases from around 366,000 to 500,000-plus over a mere 20 years? Many things, few of them good, as I discovered when I returned to Portland this weekend after what was effectively a 12-year absence. The city I grew up in had retained much of its architectural heritage from its first efflorescence in the latter half of the 19th century, and many of its cast-iron and rough-stone buildings were still intact. An early morning walk through downtown revealed that to no longer be the case, a depressing development for those of us who treasured the charm and beauty of the old city. Didn't PDX learn from the wholesale destruction of American cities in the post-war era that historic architecture was something to be valued, not torn down to create parking lots or soulless "luxury condos"? Apparently not, and the result is an architectural tragedy.
Here, then, a few examples from the buildings still standing of what this city looked like until about 10-15 years ago, when central business district still largely consisted of beautiful buildings like this.
Posted by Jackie Jouret at 4:40 PM